Maria Giannakaki was born in 1958. She studied at the Athens School of Fine Arts (1977 -1982). In 1983 she was awarded a scholarship for postgraduate studies in China, where she studied the techniques of traditional Chinese painting, ink drawing and calligraphy.
She has presented her work in solo and group exhibitions in Greece, China, France, Germany, Belgium, India, Italy, Luxemburg, Sweden and the USA. Lives and works in Athens.

The strength of Maria Giannakaki’s works is in their fragmentation. The aesthetics of drawing that pervades her work, along with a selective use of overflowing colour emanates from the same approach to the image Giannakaki acknowledged in chinese and japanese art. Her paintings don't begin from an overall conception and execution of the theme, but locally: from areas of dazzling colour, which almost become autonomous, and graphically gestural areas, echoing ideograms of Chinese calligraphy. The dominance of an empty background paradoxically emphasizes the sure power of void, which unexpectedly highlights the preciousness of the images that it contains within an elliptical aura.

2000
Approaches of Greekness. Generations of the 80’s and the 90’s, curated by Nelly Kyriazi, Luxemburg and Sweden

1999
Approaches of Greekness. Generations of the 80’s and the 90’s, curated by Nelly Kyriazi, Municipality of Athens’ gallery, Athens

DREAM FACES IN THE VIBRANCY OF LIFE

With a profound knowledge of her subject, in a manner rather like that of an ethnologist, Maria Giannakaki has given herself up to an adventure which took her very far away -to the discovery of China and its primordial civilisation. She learned drawing and calligraphy in ink and applies that technique to absorbent rice paper. This art precludes corrections and changes as it cultivates precision and quality in the visual act.
In her amalgamation of Western and Oriental traditions, Giannakaki seeks for a universal mode of expression which manifests itself within the framework of an art combining paper made of rice or silk with the canvas, which relies on water-colours as well as acrylics and on guache as well as charcoal. Although she paints with Chinese brushes, her style remains Western, and she has drawn the technique of gold illumination from Byzantine art.
The subjects she chooses are the products of pure imagination inspired by her exotic travels, by the traditions of other countries and by street scenes. In reality, Maria Giannakaki is a painter of portraits, an artist who works powerfully in the cartoon and at the same time is superbly capable of conveying the despair and loneliness of a child hiding its face with a shy gesture. Apart from their moving universality, her figures -lying somewhere between drawing and painting, sometimes detailed in the extreme and sometimes mere outlines in soft colours, always ethereal and as light as a breath of wind -caress the canvas as if by doing so they could justify their existence…
In her larger compositions, we find ourselves back in the world of Chagall, in a poetic vision in which blue hovers, the faces float, and earth and sky dissolve into immaterial universe in which balance pulsates and the horizon walks a tightrope.
…In choosing the path of cultural and visual syncretism, the art of Maria Giannakaki pays tribute to transformation, to the dream and to tradition as a form of cultural expression and as a source of artistic expression. 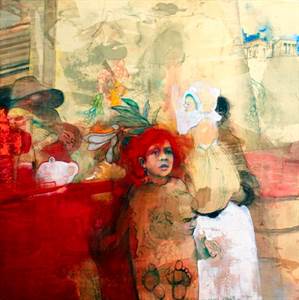 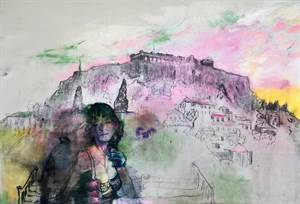 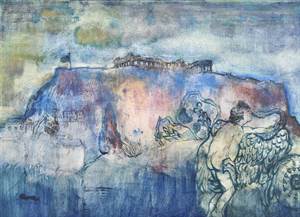 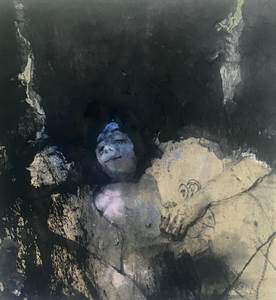 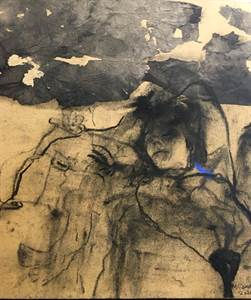 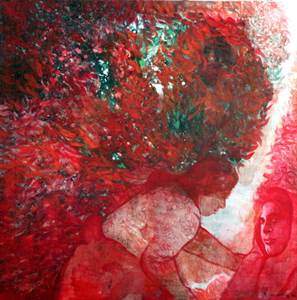 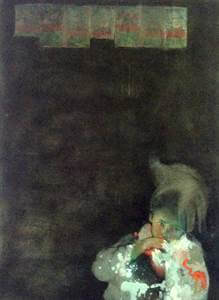 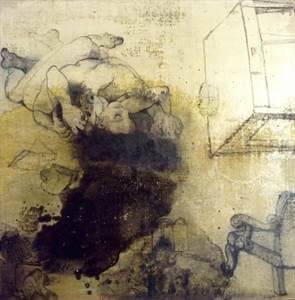