Xanthippe Tsalimi is a Greek fine artist who currently resides and works in New York City.  Xanthippe studied painting at the Athens School of Fine Arts, under the instruction and tutelage of very renowned Greek artists J. Valavanidis, P. Charalambous and M. Manousakis.  Art studies were preceded with a bachelor’s degree in interior design and architecture at the School of Graphic Arts, at the Technological Education Institute in Athens. In addition, these studies were supplemented by her attendance at Helsinki University of Art and Design in Finland, with a grant where she participated on a multi-national art project.  After completing her studies, she was awarded a scholarship from the Royal Academy of History and Art of San Quirce and Madrid’s Academy of Fine Arts (2007 & 2008). The award granted her residency in various landscape workshops and exhibitions in Segovia, Spain.

​Xanthippe’s primary artwork consists of oil paintings, of different scales and formats. Her work is an amalgam of environmental and atmospheric abstracts; images that evoke mood, ranging from tranquility and solace, to turbulence and chaos. Her work is atypical of Mediterranean art.  It is timeless and reflective, human presence is strongly implied and yet void within the landscape. An experience of places and emotions, much like a not so distant memory or of a time that may or might not have come to pass.  The landscapes are neither vacant nor desolate, but rather strong in sentiment and very much alive in their moment.

​During the past several years, Xanthippe’s artwork has achieved much notable recognition. Her work has been shown throughout Greece, Spain, France, Finland and within the United States and can be found in private collections in New York, Miami, Los Angeles and in Australia, Belgium, France, Greece, Switzerland, Spain.

If you look carefully, you will realise that abstraction is inherent in every reality, and, conversely, in each abstract figuration are included the thousand and one aspects of each specific thing, or at least of a condition which determines its particularities, since all things are fluid and mutable - and how much more so the dispositions of our psyche. In painting, in any event, it is variations of atmosphere and psychic moods which we usually depict, even in those cases where, as a pretext, we use forms, re-articulating or revealing hidden meanings, as we create these and throw light on them by means of shapes and colours.

As early as in Homer's Odyssey, we find two disyllabic words which both - when compared with one another - end with the same liquid consonant - rho - thus indicating their unsecured fluidity, as well as their ephemeral state, and, at the same time, their latent affinity. These are the Ancient Greek words ὄναρ (onar - meaning a dream) an ὕπαρ (hypar - which, in any case alludes to the verb meaning 'exist' - ὑπάρχω - and means a 'waking vision', existence in and of itself, that is, meaning 'conscious reality'). Thus Persephone when she set eyes on Odysseus, saw "not an ὄναρ  but a ὕπαρ ἐσθλόν", that is, it was not a dream which she saw but conscious, and, moreover, good (ἐσθλόν) reality.

Xanthippe Tsalimi opts for linseed oil as her material, in order to be able, by means of suggestion, to give expression to the fluid and interstratified state of a visionary convention concerned with the multi-levelled and at the same time composite nature of reality, chiefly, one could say, of its states on the cusp. It is a matter of psycho-intellectual particularities and conditions, which the artist renders by means something like cloud formations.

On the basis of a carefully produced colour tonicity and its fluctuations, Xanthippe Tsalimi shapes masses in the fields of her negotiations in art, while at other times she forms structural displacements, with a controlled feeling for their 'weight', the transparency which they convey, the dilutions of their material or their density in certain areas, features which characterise the stylistic colouring of each composition, its internal relations of conflict, and at other times its harmonised balances of co-existence, as well as its allusive lucidity, and, above all, its organicity arising from its internal handling of rhythm, which gives expression at the same time to its surprising mutability.

The artist posits intermediate situations which unite and at the same time separate the familiar and the unfamiliar and the distant and the nearby 'event'. Because these are insights which include a multiplicity of states, without limiting any of them, the surface becomes background and the background foreground in her works, thus giving the impression of on-going movement and transformation of those things which each of her compositions is enjoined to suggest. From this point of view, artistic creation is similar in many ways to the manner in which dreams work. Through the subconscious, sensations are projected which, in order to be 'perceived', borrow some kind of figuration, but without this being bound or entrenched in some narrative plot. In this case, associations are called forth, but not affinities which would lead to time-space resultants. This is the reason, in any event, why we cannot narrate our dreams, because we would be forced, in rationalising them, to use an ordered 'sequence'.

The abstract composition of Xanthippe Tsalimi functions in her works like a line of poetry. It conveys impressions from the personal subconscious as that engages in dialogue, both rhythmically and startlingly, with depositions which are constantly dredged up, derived, one supposes, from the collective unconscious. This was what, in any event, made me, when I first saw this artist's works, have recourse, by way of the finesse of their tonal colour gradations, to the visionary state, calling to mind at the same time Homer's dipolar 'onar/hypar', and its mythopoeic fluidity - a fluidity which unseats any rational-seeming containment, suggesting through its vibrant and constantly transformed 'clouds' the conversation of contemplation with the unseen, and, moreover,  in an analogous way, with the function of the fraction which has (terrestrial) earthiness as its numerator and (heavenly) transcendence as its denominator.

May 2019, for the catalogue of the exhibition "A bend in time" 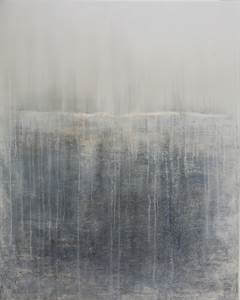 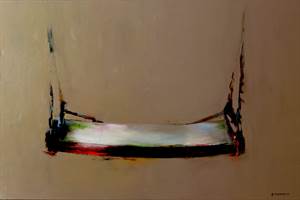 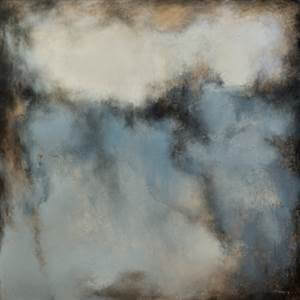 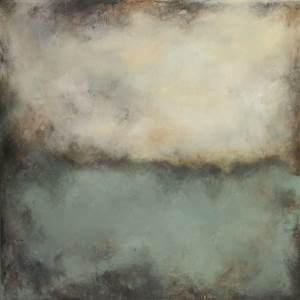 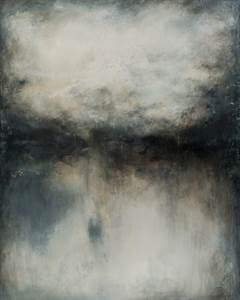 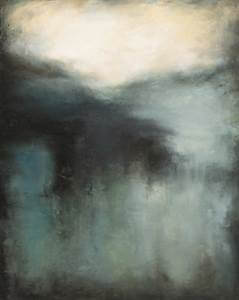 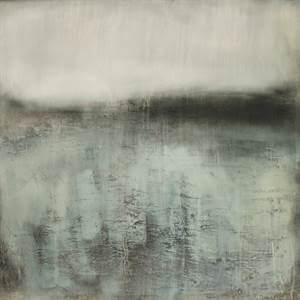 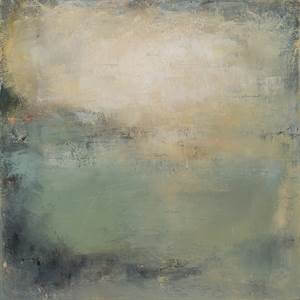 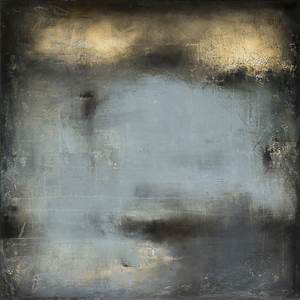 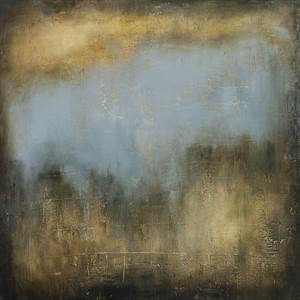